Here is my sweet girl…
Jesse Elizabeth Simon
6lbs.12 ozs
she is so sweet. here is Jesse and her big sister who just loves her so much! 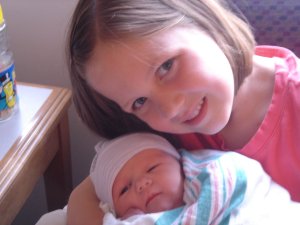 and the brother who insists it is his sister… a boy 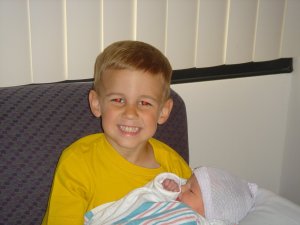 i think he is starting to accept it though.
Jesse’s birth was a great one, went smooth and moved along slow but that was fine with me.
I think all i have done since we came home was sit a stare at her. I just sit in a chair here in my living room and look at her, or nap with her, but mostly feed her.
It has been a week and she already seems so big to me. I just want her to stay small like this, snuggly, smelling like johnsons baby loation. I love wrapping her in her blanket and laying her on my chest and just watching her. She has so much crazy dark thick hair, more then both my kids had combined, she is a hairy little thing.
i have 6 weeks home with her and i feel like it is going to be the quickest ones ever. I know i am lucky she will be close to me all day when i go back to work but it already breaks my heart. I want to be with her all day. I guess i just have to not think about that right now…or just not think about it at all. I have a great job and am so lucky to have her right there in the CEC where i can go and be with her as much as i need to during the day.
Speaking of the AWESOME CEC. Here is the Red Room Graduate!

Wyatt had his ceramony on friday so we had an outing to Hyland to watch him graduate, basically from the red room to the blue room BIG changes, the biggest being he now has to take care of all his own bathroom needs!
this is his favorite bike

i am amazed by what he has learned in his short time in the red room. his teachers are the best, they took such great care of him and he loved each of them for a different reason which i love. Ms. Danita saved me though. i was such a mess when i first had to leave him and she made the transition so much easier for me and for wyatt.
Jesse got thrown into the routine early… she was one week yesterday 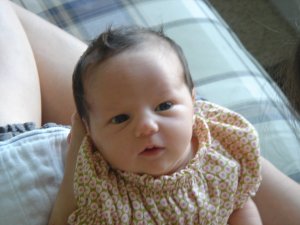 and today she went to watch her sister play soccer first 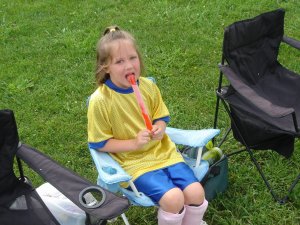 it was the last week of soccer. Grace was lucky enough to have an amazing soccer coach. Coach Colleen is such a good coach and Gracie really likes the sport and learned how to play. After soccer was her first T-ball game

i think T-ball is going to be a whole different story, it is a little crazy and slow moving. We will see if it improves. hopefully cause it is a long season.
ok this was a super long post… i will update again soon!